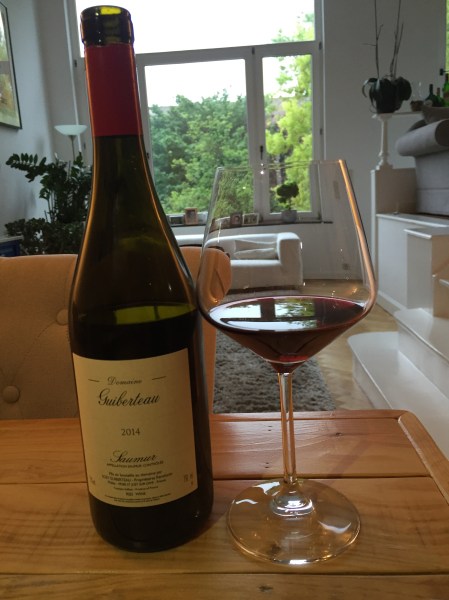 When is a wine faulty? There are plenty of times when this is clear from the start; a messed up colour, raging volatile acidity, vinegar,…. Other times it is not always clear. For a long time, I did not like Cabernet Franc as there is often something unpleasant in the nose at first, especially in the case of young wines. You get aromas of degraded fruit, barnyard or just plain shit. This most often happens with wines that have been created in an oxygen-depraved environment, like I mentioned already when talking about Hanami about a year ago, but the trick is finding out if the smell stays, which makes it a fault, or if it dissipates and adds character in combination with other aromas and flavours.

Honestly, for me it is a gamble to see where a wine will go. Bobinet’s Hanami was lovely after an hour in a carafe, but some of his other wines just did not get rid of it and stayed one-sided, bordering on undrinkable. Even if done right, these wines are not for those who just pop in a supermarket to pick up a bottle for a quick sip in the evening, as chances are that the reductive character of the wine is so unpleasant that you will have it poured downed the sink before giving it a second chance. For a wine enthusiast however, this offers excitement.

Near the end of the Levée de la Loire in February, I ended up at Guiberteau. Romain, the winemaker, had already left to mingle and exchange bottles with his fellow winemakers, but his father, who actually has nothing to do with the estate, kindly showed me through the range. The whites are exemplary in style and among the top of Saumur, no questions there. These are hard-to-get but amazing wines and if you ever see one, snap it up! I always had a soft spot for Saumur Rouge though, as I think that the wines have an elegance that you cannot always find in other parts of the Loire Valley. Robert warned me that the 2014s were not showing well exactly, and it was difficult to make a proper assessment at the time.

The other day I saw that a local gourmet market had the Saumur Rouge 2014 in the discount bin and thinking back to my experience at the Levée, I decided to give it a shot. It was close to being unpleasant on day one, not showing anything fruity or inviting enough to actually take a sip (no wonder it had to be sold at a discount!) so I left it in the wine fridge and opened up another bottle. Day 2 was a different story and it reached its peak on the third day. There is a certain wildness that stays but in a complementary manner, not intruding. There is ample black fruit to be found and the wine is well-structured on the palate, tannins are still a bit firm but the finish is long and clean. Loads of potential and energy, which is impressive for an entry-level wine, and well worth waiting a couple of days after popping the cork!

Other Loire wines talked about: