We are nearing the end of the growing season of one of my favorite vegetables: white asparagus. I grew up in a town that has in recent years styled itself as Belgium’s hub, and rightly so. Kinrooi is one of the biggest producer of white asparagus, and unlike the big, fat stems that are more about volume, here they are properly treated as a foodie’s treasure. Even though I have lived in Brussels for the past couple of years, I would never dream of buying my asparagus anywhere else, and it is always a great way to welcome Spring. What better way to now end the season than with two Belgian classics?

Winewise, the literature is not a fan. Too herbaceous is an often-heard argument, but more importantly is the impact that it has on your palate, as the asparagusic acid it contains can make a wine taste lean and metallic. Overly fruity wines or sweet wines are therefore considered a no-go, but there are of course loads of wines that do prove to be up to the challenge. My go-to country would be Germany, where asparagus is also a true classic on the menu, but today we broaden our horizons.

Let’s start with a dish that my mom used to make to inaugurate the new season: asparagus à la flamande. Deceptively simple but simply delicious with only a couple of extra ingredients: parsley, eggs, a bit of nutmeg and high-quality butter. How did the following wines fare? 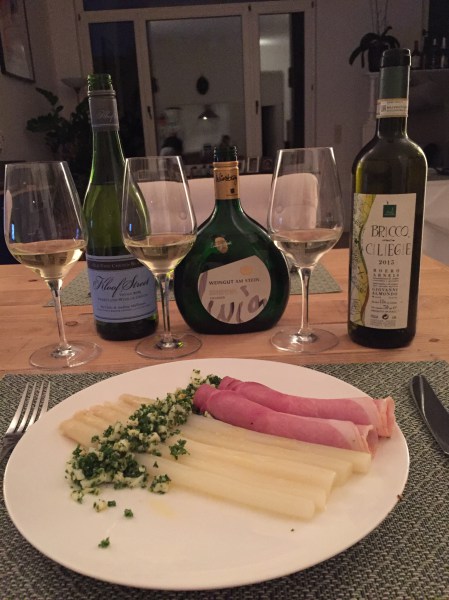 First up, the German selection may be familiar with those who have been following my writing since the beginning: Am Stein’s Innere Leiste Silvaner 2012. It just goes to show that I don’t just write about the wines I like, I actually tuck them away in my cellar as well! Silvaner seems to be a good match with asparagus as it also has an herby, spicier side. It is more pungent on the nose than I remember, but on the palate, it has a nice, mineral intensity to it. It has clearly benefited from a bit of bottle time, and I think that it can still develop wonderfully for the next couple of years. The combination shines in its completeness; preserving an herbaceous balance against the parsley and asparagus, yet retaining a sense of gras to match the butter. A great wine in its own right, lifted to a higher level when paired with the right dish.

Staying within the minerality theme, a South African chenin blanc: Mullineux’s Kloof Street chenin blanc 2015. I had not tasted the bottle before and bought it solely based on the producer’s reputation. It comes across a bit austere with a flinty, reduced nose on the first day. There is a bit more fruit afterwards but overall it is rather muted. Soft on the palate, and nothing that really stands out. Unfortunately, it did not stand a chance against the eggs and butter; the slight astringency that was already present as an afterthought was suddenly much more noticeable, so let’s just chalk it up as a learning experience!

Finally, the most surprising match: Giovanni Almondo’s Roero Arneis ‘Bricco delle Ciliegi’ 2013. The bottle was chosen completely at random from the cellar, as I remember it being quite tight and mineral in flavor, so I was hoping it would work. It wasn’t until basically just now that I found out that the terroir of Roero is also ideally suited for asparagus! Perhaps the most subtle wine when it comes to the aroma, but very nice. Mostly on spring flowers, a bit leafy and a freshness that also dominates the palate. The tightness is still there, but there is a lovely tension that actually goes really well with the dish, a great discovery.

While asparagus a la flamande is in essence an easy dish that can uplift an average weekday, the next meal is something that requires a bit more work: Slip soles with fresh North Sea shrimps and asparagus with a white beer mousseline sauce. Granted, shrimps are hideously expensive these days, but combined with a couple of perfect slip soles as well as a velvety mousseline, they are just irresistible. It is a richer dish, so we would need a wine that can handle a bit of pressure.

I looked for something that could match the mousseline first, so something with a bit of structure, perhaps a hint of butter, yet something mineral as well, as the delicate flavours of the shrimps could easily be overwhelmed otherwise. Finally, there are the asparagus, which would only pick a fight if a wine had the audacity to show fruit. So round yet minerality and a more muted yet intense character led me to the Jura, to what it perhaps my best Chardonnay discovery of the year: Domaine Pignier’s A La Percenette 2014.

I haphazardly discovered this estate when I was served a deceptively basic Cremant de Jura in a restaurant a couple of years ago. I was stunned by what I found in my glass, a wine with a complexity that surpasses like half the offer of Champagne at this price point. I jotted down the estate’s name, but of course I lost the note and forgot about it. When I encountered the winemaker at la Renaissance two years ago, I had the opportunity to taste a couple of other wines, which were so convincing that I bought a selection of their wines to taste at home.

Pignier is one of the oldest estates in the Jura, with the seventh generation currently at the helm. The wines are the epitome of slowness; taking the time to allow the wines to find their own natural balance, giving them the opportunity to literally prepare for the ages, as the estate confidently states that their wines can easily go for 10 to 20 years. A la Percenette is a wine of crystalline precision; not something that you notice at first but that sneaks up to you and captivates your attention. It is a lively, yet calm wine, with a depth that goes fantastic with the mousseline sauce, and a freshness that really complements the herbiness of the asparagus and the salinity of the shrimp. A match made in heaven.