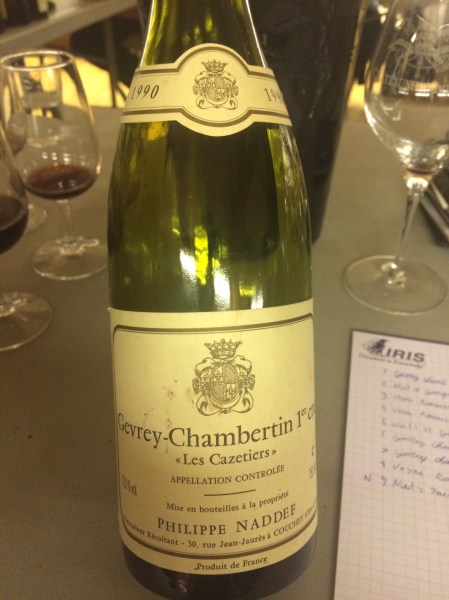 Note: Linkedin has kindly informed me that it has been two years since I started blogging with The Wine Analyst. Given that more people congratulated me on this anniversary than on the one of my actual job a couple of months earlier, I must be on to something! Anyway, it has been a bit sporadic lately, the entire year in fact, which needs to change. Commitments are all the rage during the day job, so let’s just say that I give in to the hype and will commit to more regular and structured posting!

Last year I briefly addressed the tendentious relationship I have with the red wines of Burgundy. Since then I have participated in numerous tastings, bought my share of wines, and have even written several articles which will forever remain in draft. None of this has appeared on The Wine Analyst as the bipolarity of Pinot Noir can be nerve-wrecking. There is a fair share of plonk out there, and it is often used to give Pinot Noir a lot of flak, but I would argue that the same can be said about nearly all grape varieties. These are wines that drop off my radar as soon as the blip appears, so in the larger picture, they are of little consequence in forming an opinion.

My conundrum lies with the wines that tremble with potential, seemingly held back by something that you cannot quite put your finger on. There is a sense of illusiveness, and whereas there may be tasters who supposedly have the required palate sophistication to form an idea of where this or that wine will go, but I’d gather that it takes quite the experience to even get close to this level of self-confidence.

Luckily, this is where a wine club comes in. One of my favourite wine merchants, Epivino,  holds regular tastings, not only of the wines in his portfolio, but also of the treasures he snapped up during numerous shopping frenzies in Burgundy. These are often wines that are way out of my budget, even in recent vintages, or that are nearly impossible to find now, so the experience is priceless. Horizontal tastings, vertical tastings, producer visits, comparisons with other countries, the past years have been eventful! A recurring theme is the vintage check; tasting the same wine or at least the same climat across several years. This is immensely interesting as it allows you not only to look at the evolution of a single wine, but also to the thing that make different climats that may only be a short distance apart so unique.

I had my first epiphany Burgundy moment during one of last year’s tastings, a first clue to solving my conundrum. We tasted the Gevrey Chambertin Les Cazetiers Premier Cru by Philippe Naddef across ’05, ’01, ’96 and ’90. It never managed to stand out during the younger flights. Too hard, too mellow, too much alcohol, or too thin. Nothing seemed to be working in its favour, especially not compared to other climats, but all of a sudden, 1990. A wine that had merely been ‘a decent Burgundy’ for decades was now so harmonious and joyful that for me, the tasting ended right then and there. Pure unadulterated magic!

There have been bottles that have been excellent and even better since then, but to really get the evolution in this wine made it all the more special and memorable. The vintage check tasting a couple of weeks ago did not allow a similar experience, but was an eye opener on a different level. Whereas the Les Cazetiers comparison was basically insight in a certain producer’s style, this year’s check showed how vintage conditions impact wines from different climats. Of course, the great selling point behind the notion of a climat is that it is unique, but that does not mean that there cannot be shared aspects.

2006 was in general not very memorable and 2001 was a mixed bag, with only the Chambolle-Musigny Premier Cru by Bertheau standing out thanks to the juicy and lively impression it left. It wasn’t until we got to the nineties that the great wines showed up. I was particularly impressed by a Chambolle-Musigny Les Charmes Premier Cru 1996 by Gerard Mugneret, one of the family’s oldest parcels. It had this ethereal feeling, something that skips over your tongue, pure but not without depth, still in its prime now with a florality not expected in a 20 year old wine.

1991 however, was a completely different story. I was told that it was a vintage that had somehow fallen between the cracks after the slammer of 1990, but all wines tasted were terrific, balanced, incredible youthful and simply a joy to drink. We had tasted Marquis D’Angerville’s Volnay Champans Premier Cru in 1996 as well, but it was nothing in comparison to 1991. A certain sternness yes, but an earthy, almost mineral streak running through it that carried it to an incredibly lengthy and soft finish. It came very close to being the evening’s winner, but Georges Mugneret’s Chambolle-Musigny Les Feusselottes Premier Cru absolutely killed it. It is one of those wines that you know you will never drink again, so every drop is savoured. Heady in aromas, built like a cathedral on the palate with so many layers of flavour that you lose count, and a finish that you simply undercut with another sip.

It was interesting to see how the wines from 1991 (aside from the two mentioned we also tasted Albert Morot’s Beaune Les Marconnets Premier Cru, which was good, but not in the same league) all came across so incredibly young. They were right at the tipping point, just a bit of tertiary foresty aromas without losing a sense of fruity exuberance. I never used to care that much for the wines of Chambolle-Musigny a bit too pretty and polished in their youth in my opinion, but seeing what you can end up with has triggered yet another moment of reflection!

It was an eye-opening tasting. I sometimes look at the small section of Burgundy in my cellar going ‘what the hell was I thinking’ but getting a glimpse like this of where it can take you gives me a reasonable degree of confidence that there will be a point were a wine will just click. The only challenge will now be to make an educated guess as to when that will be!

For those who are interested, Epivino will organise it’s autumn tasting on the 12th and 13th of November. The list of wines you can taste is simply ridiculous, so I would recommend checking it out.