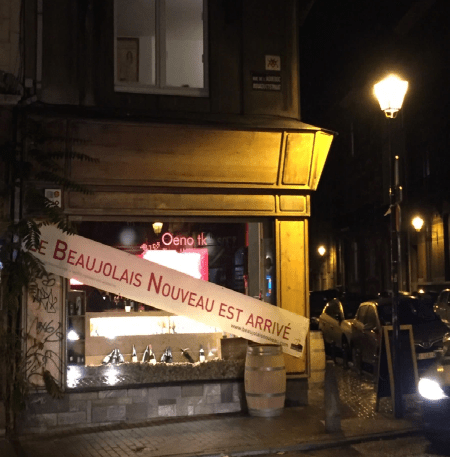 One of my previous articles, on mistaking marketing ploys for wine, has been shortlisted for a Born Digital Wine Award in the category Best Editorial/Opinion Wine Writing. Obviously I am absolutely thrilled by this. Competition however is steep, but here’s hoping for a place in the top three. In the meantime, check out some of the other articles that are up for nomination, there is some great stuff to read. You can find them HERE.

As of last Saturday, I can officially call myself sommelier-conseil, having gotten the diploma and fancy pin to prove it! Together with passing WSET level 3 a couple of months ago this is a highlight, and looking back on the past three years and an excellent week in France over the summer, I can say that it was a great ride. Wine is something that brings people together. Fellow students have become dear friends, and the foundation has been laid for future tastings and nights of debauchery.

In a first example of a night out on the town had with a fellow sommelier-conseil, the celebration of Beaujolais Nouveau 2016!

My first advice to readers would be to completely ignore the Very Serious Wine Writers who lament that Beaujolais Nouveau is basically undrinkable marketing-driven grape juice (a Flemish example that got me reeling). Year on year they seem to rejoice in the fact that the popularity of BN is declining, and that sooner rather than later, it will only be used by the Japanese to bathe in.

Beaujolais Nouveau is in essence no business of the Very Serious Wine Writers. There is nothing to analyze, nor to whine about or to pick apart. Nothing that will allow you to pass anything resembling a meaningful declaration on a vintage or the state of a region. There is a lot of plonk out there, and I wouldn’t be caught dead with a supermarket BN, but if you look a bit further, there is a proper revival going on. Beaujolais Nouveau is being recognized for what it is: a good excuse to have a night out on the town and to simply enjoy wine. Regrets may be had in the morning after, but who cares when you can immerse yourself in non-pompous decadence?

The Brussels wine scene comes alive with Beaujolais Nouveau. My facebook newsfeed was filled with wine bars promoting their evenings, people organizing soirees and taking the Friday off in preparation of the inevitable hangover. Beaujolais is and will always be down to earth, an invitation for unadulterated fun. Those who only look to wine with the intention of passing judgment on it should simply look elsewhere for one night. 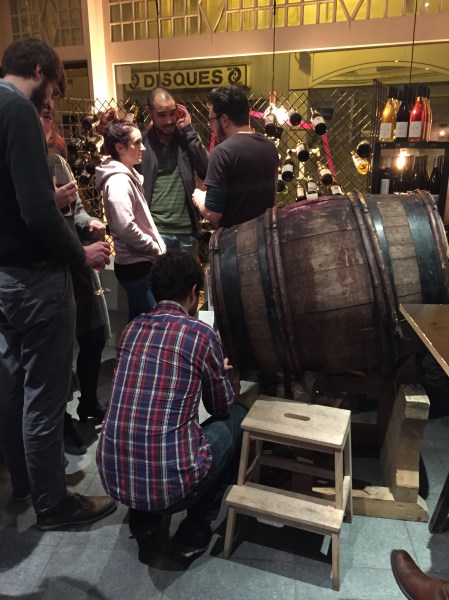 We made a late night tour among a couple of wine bars in the neighborhood. Etiquette may be the most established one, known for offering wine from every part of the world and so it could not exactly be called a Beaujolais Nouveau celebration. We quickly moved on to Titulus, which is the hottest spot for natural and real wines in Brussels for the time being. Each year a barrel of Chateau Cambon’s Beaujolais Nouveau is emptied in record time, and I buy a bottle to tuck away, incidentally proving that it is actually more than just a hype, as it is also perfect in the summer.

OenoTK is apparently the oldest wine bar in Brussels, and they had four bottles to show. At this point we were walking the fine line between being confident enough to make huge statements on what we liked to everyone who would listen and being just a bit hammered, so here I can say that I really enjoyed Lapalu’s BN, even though I have never been moved by his normal cuvees, and Yann Bertrand’s P’tit Bouchon. This one was a bit too natural for most, but I thought it was energetic and alive. 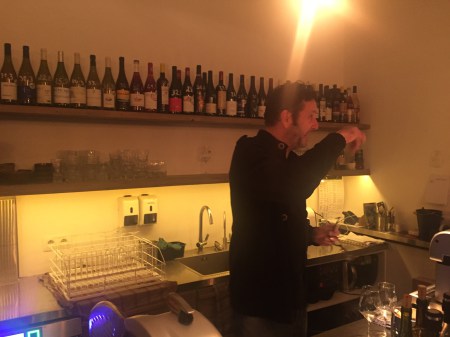 We ended up at Tarzan, the most recent edition to Brussel’s wine scene. Mathieu Vellut (apparently having lost track of his personnel in the picture) is an importer of natural wines, so the bar is basically an extension of his work. He talks your ear off, but keeps pouring at the same time, so being trapped in an enjoyable conversation and becoming increasingly drunk meant that this was the final stop of our evening. Remy Dufaitre’s Beaujolais Nouveau was great (although this should be taken with a grain of salt, superlatives seem to have been invented to be used from the seventh glass onwards).

The third Thursday of November is in general not a night that will go down in the annals of history for the fantastic wines tasted. It is however the perfect occasion to simply remind yourself of he joy that a glass of honest wine can bring!