Finally, my impressions from a day at the Salon des Vins de Loire. Contrary to last year, I only attended on Tuesday, due to the Salon changing its calendar and starting a day earlier, thus overlapping the numerous off-events. I don’t really know why this was done, nor did I get a straight answer from basically anyone, but I do think that it is to the detriment of the Salon. Visitors were few, perhaps also because it was the final day, but compounded with the fact that there was an entire tasting area gone in comparison to last year, this is not a good sign. I get that you want to be the biggest and the best, but look at Millésime Bio and Vinisud facing off just a week before the Loire events; no one really wins.

As last year, La Levée de la Loire and the Demeter tasting took place adjacent to the Salon, and at times it definitely attracted more people, silly check point between the two aside. It was a bit of an absurd situation with a couple of winemakers like Nicolas Grosbois having a stand on both the Salon and the Levée but let’s just chalk this one up to a French bureaucracy-fetish. I do think that this is a cooperation that needs to be enhanced further and that a partnership without egos would be beneficial to both producer and visitor.

Anyway, to the wines! I had come across the wines by Jacky Blot from time to time, but never really found the time to get to know them all that well. La Taille Aux Loups has a stellar reputation when it comes to Montlouis and in Vouvray. The latter has been smeared in recent times as due to a INAO decision, it is no longer allowed for an estate to vinify Vouvray wines outside of their appellation. Given that Blot only owns cellars in Montlouis, he has to declassify his Vouvray wines to Vin de France (as a nifty coincidence, a little while following this decision, it was no longer possible to produce 100% chenin blanc in the appellation Touraine).

In comparison to other producers like Bertrand Jousset or Francois Chidaine I found the wines to be richer, more Burgundian in style almost. The younger wines were marked by oak, balanced but present. This did however add some complexity in the older vintages presented. Highlights was definitely Les Hauts de Husseau in 2015 and especially in 2009 (when it was still called Remus+), showing rich fruit with a mineral streak running through it. Crunchy and ever so slightly floral on the palate. Clos de la Bretonnière, the wine formerly known as Vouvray was very interesting as well, in particular the 2008 which was a textbook example of ageing Chenin Blanc, wax, ripe but zesty fruit and the weighty impression of sweetness without the sugar. 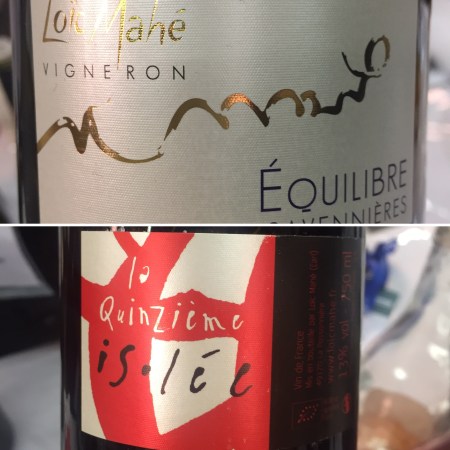 Aside from this little intermezzo, my focus was on Anjou and Savennières for the remainder of the Salon. Loic Mahé attracted my attention due to his nifty labels (all the wine bla bla bla aside, we are all entitled to our shallow moments).  He has been around for about 10 years now and I find his wines to be everything you want from Savennières. Smoky minerality, a bit stern at first but once you get it talking a wine that just will not stop, going through great lengths to keep you hooked. Two Savennières on show, Les Fougeraies 2015 which was very pure, linear with an austere touch, too young to really appreciate now, and Equilibre in 2014 and 2010, the latter being polished and richer, perhaps just a bit too much concentration if you were to really pay attention to it, but a wine with great potential for food pairing.

The more surprising wine was La Isolée 2015, a Cabernet Franc that only completed its fermentation after a year! I have had my share of slow fermenting wines, but always in white, so I was very curious to try this. The wine had been blended with a barrel that had gone through the fermentation as it should have, but this was still not your average Cabernet Franc. Incredibly inviting on the nose, floral with an elegance that I would have placed in Saumur-Champigny. The palate did not deliver on the complexity I had anticipated based on the nose, but this was still great, well-integrated tannins, a bit of warmth but a smooth, enticing finish. Let’s hope that he will come across a similarly funky barrel in future vintages! 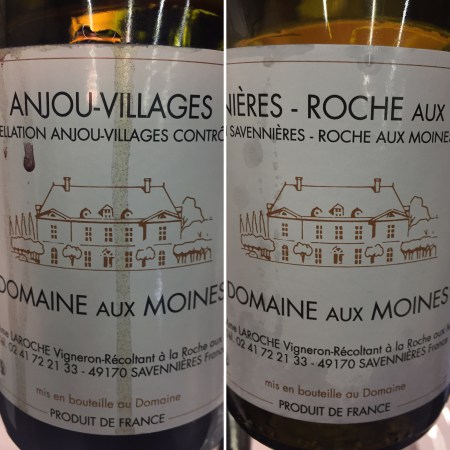 Domaine aux Moines is old school, there is no better way to describe it. Tessa Laroche is a great lady, she comes across a bit intimidating, but as soon as she starts about her vineyards she will not stop. The estate produces only one Savennières Roche aux Moines, so it is always a treat to taste several vintages. 2013 was surprisingly strict. Pungently smoky, with great tension on the palate, simply brimming with energy. This is starting to come around, but I would tuck it away for an additional couple of years. The 2014 was more polished, more eager to please without losing an austere touch. It was a tad warm, maybe a bit elevated in alcohol, but it surely has the structure to support it. The 2015 had only just been bottled so it’s very difficult to say something meaningful about it, but given the estate’s reputation, the wines I tasted and the overall vintage quality, I would buy it with confidence.

The estate is one of the only ones with Cabernet Franc and Cabernet Sauvignon planted on Savennieres territory and Tessa stated that these may very well be the oldest vines planted in the appellation! They are ineligible for Roche aux Moines though, and are therefore sold as Anjou-Villages. I have tasted it in the past, and in the more difficult vintages it struggles with ripeness with a persistent bell pepper touch. 2015 fared well luckily, vibrant fruit, plums and a clean but grippy palate. The acidity and tannins are there as they should be and will give this wine something to stay alive for a couple of years.

So, three intense tasting days that have again taught me a lot about what the Loire has to offer. Valuewise I am moreso than ever convinced that it is one of the greatest regions for cool climate wines and honestly continue to be baffled by the lack of knowledge of importers and consumers. There is so much history and diversity to be discovered, and any exposure that the region gets is well-deserved. I’ll surely be back next year!