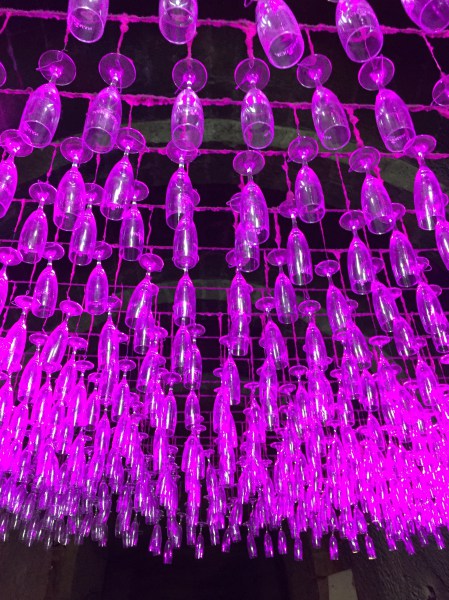 Dive is the type of chaos with a flair that only the French know how to do right. Get annoyed at the lack of navettes between the Saumur station and the Ackerman cellars where la Dive takes place or walk. Get pissed off at the crowds of backpack-carrying groupies who just hang out with their revered winemaker of choice, or simply mingle with them. Finally, get paralyzed by the fear of swallowing due to the lack of spittoons, or carry around your own in a trolley, trumping backpacks in annoyance, like a certain couple of Dutch wine merchants (although you never know with the Dutch, they may as well have been creating their own very special blend of salvia-textured wine vinegar).

None of this detracts from the atmosphere that you can find here though, with an almost palatable energy and love for great wines. compared to wandering around a bit aimlessly at times in previous years, I had come more or less prepared this time. My target was the red wines of Saumur and Saumur-Champigny. Even though distractions are inevitable, I was immensely pleased with the opportunity to meet several of the appellation’s top producers.

A couple of weeks ago I was looking for the wines of Domaine du Collier, owned by the son of the late Charlie who owns Clos Rougeard, the Loire’s illusive hipster wine. It does however seem to be perennially sold out in Brussels, so I ‘settled’ for the 2014 Saumur-Champigny from Sylvain Dittiere’s Domaine Porte St Jean, which was a fantastic surprise. Both Antoine and Sylvain where therefore straight up on my hitlist, and their wines did not disappoint. I was impressed by the entire range, both white and red, for Domaine du Collier, but the stars from Domaine Porte St Jean were without a doubt the red wines. Layered with complexity but utterly drinkable. An estate to watch! 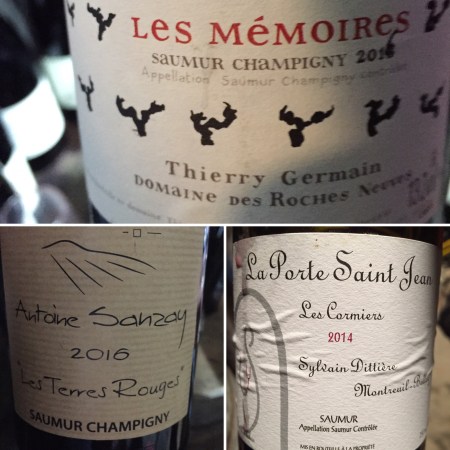 The two producers who are nowadays at the top of their appellation and whose reputation is spreading quickly are Les Roches Neuves, where Thierry Germain is in control and Romain Guiberteau, whose red entry wine I already presented last year. The Germain wines are prime examples of restraint. The have a dark, fruity core that is carefully hidden by a beguiling floral aroma. Les Memoires is particularly good, made with centenarian wines which translates to a profound yet elegant sensation on the palate, a wine that gently but insistently asks for attention. It was my first encounter with the white wines of Guiberteau, and their reputation is entirely justified, and the Clos de Guichaux 2015 is a wine that I would buy in a heartbeat, linear, electrifying in its acidity without losing an almost feathery elegance.

When I first went to la Dive three years ago, I was stunned by the wines made by Clement Baraut, an oenologic consultant turned independent winemaker. I visited him the following day and talked him into selling me a case of Les Petits Coulées 2013. Unfortunately, the wines turned out to be a bit unstable, and especially the final bottles, drank near the end of last year, showed rapid signs of oxidation. 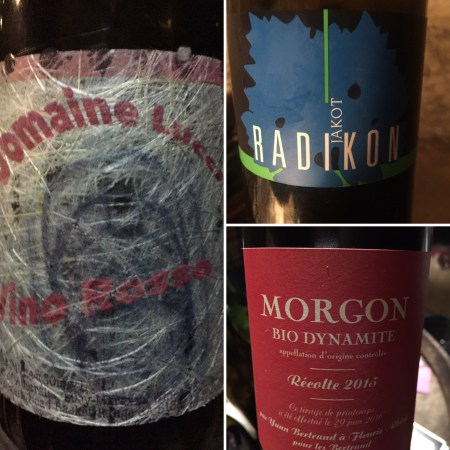 I did want to taste the wines again to see if I was wrong from the outset, but what I found was that they were showing great, linear with a smoky minerality so typical of Savennières. I noted that Baraut reduced the levels of sulphur dioxide added since 2013, so I am a bit sceptic when he states that they can be kept for 10 years. If you were to encounter a recent, well-stored bottle however, I think that you will discover a great wine.

Aside from Burgundy, the crowd appeared a bit thinner in comparison to last year (perhaps the tiny harvest in Burgundy meant that every merchant or importer prioritized serious ass-kissing to secure an allocation). This meant that it was easier to chat with other winemakers like Yann Bertrand. His Beaujolais Nouveau still gives me a bit of a headache just thinking about it, but going through the range I can safely state that I was not wrong in my initial assessment. Unfortunately, he could only present his négoce wines as he lost his entire harvest in 2016. 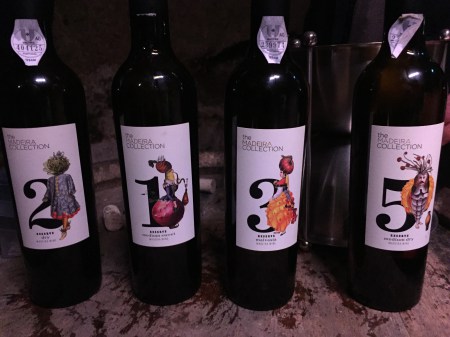 Looking beyond the French borders, Anton Von Klopper is as crazy as ever. I first met this Australian wine maker at the Real Wine Fair a few years back, and loved his Pinot Noir then. The wines on display this time were more diverse, with a far-out but fantastic wine made literally with what he had left in the cellar, including Nebbiolo, Merlot, Sangiovese, Pinot Noir and a couple of other varieties he himself did not seem to recall! Alive, fresh, vibrant and utterly smashable.

I had thought that a taste of Jolly Ferriol ‘s VDNs would be a good end to the day but what do you know, another Belgian near the exit! Bert Jeuris owns the Portugal Collection with his brother and has been creating his own Madeira wines based on what casks he can source from Barbeito. Five wines, aptly named, and all showing what he considers the essence of specific varieties or styles of Madeira. Time was too short to really get into the wines, but as I mentioned in my first article of the year, Madeira is utterly unique in the world of wine and deserves to be discovered, a worthy closer for a great edition of la Dive!