The 2014 edition of the Real Wine Fair was my first proper wine event. Two intense days packed with tasting, attending presentations given by experts, plunging into the completely unknown with Georgian wines and still remembering great wines made by the likes of Olivier Pithon, Elisabetta Foradori and Anton Van Klopper (just a few months back, I cracked my last, wonderful bottle of his 2010 Lucy Margaux pinot noir). The last couple of years I had to chose to either attend the RWF or RAW, given that London is not exactly cheap and winewriting doesn’t generate anything worthy of the term revenue. This year however, thanks to the combination of cheap Eurostar tickets and suitable dates, I had the luck of attending both fairs.

RAW lost a bit of esteem largely due to the move to a less suitable location. Winemakers looking seriously desperate at the end of the first day for lack of cooling options, the hipster signature move of carrying around enormous backpacks, oblivious of how crowded the area is, and the absence of light to properly judge exactly how unfiltered your wine was, did not go down very well. I can get that this sort of chaos may suit a portion of your target audience, but there is a point where it really raises organizational issues, especially in comparison to the professionalism and smoothness of operations I encountered at the Real Wine Fair.

Winewise though, both fairs are hotspots for genuinely exciting wines, the ones that can make you forget all the vinification and viticulture behind them for a moment, and simply deliver joy in a glass. I honestly believe that the next big wines, the ones to be identified as wine world movers in the future can be found here instead of at big fairs like Vinexpo or Prowein. 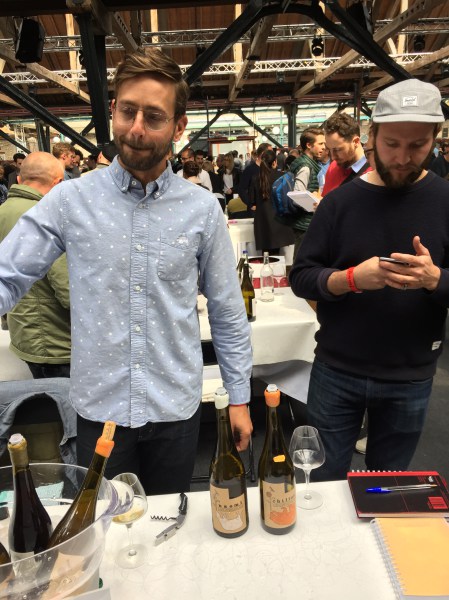 With 173 winegrowers presenting their wines over the course of two days, RWF was packed. I did have the resolve to do all the research and scouting beforehand, but being a self-identified eternal procrastinator, it ended up being more of a going-with-my-gut visit. Let’s be honest, surprise is the most interesting and memorable part of random tasting!

First up, a tour along some seriously exciting American wines. I sometimes get the impression that I am completely missing what is actually happening over there. The only US wines I regularly come across are just mainstream and, well, boring. Price points and limited availability are issues, a lack of interest among importers of scale only makes it worse. Suddenly encountering a dozen of producers is then an opportunity not to miss. One advantage of not knowing a lot about the US wine scene is that you really get a sense of discovery, of new pieces of land being discovered on an ever-expanding wine map (pictured above: Lo-Fi wines).

The booklet somewhat sneakily places Ruth Lewandowski in Utah, which is where the winemaker, Evan, is based, but for the moment all the wines are sourced from Californian vineyards. This is set to change however, as recently planted vineyards in the Mormon state, focusing on Riesling, Gruner Veltliner, Kerner and Schiavo among others will see further development in the future. In California for the meantime, Evan discovered rare-variety-Walhalla when stumbling upon Fox Hill Vineyard. The owner is well-travelled and used his globetrotting adventures as inspiration for what to plant, ending up with an eclectic mix of Italian and Portuguese varieties.

A first wine to come out of this vineyard, the 2016 Mahlon is 100% Arneis, but not as you would expect it. Sturdy, dense aromas of wild flowers and spices contrasting with a surprising acidity on the palate, luckily so as it would have been too plump otherwise. A wine more suited to drink with food than on its own, as there really is a nice palate-cleansing intensity to it. The 2016 Chilion is 100% Cortese, a variety that is apparently interesting for extended skin contact. Noticeable in the colour, not so much in the nose which is fresh and floral, subtle on the palate, perhaps a bit too much as it lacks profoundness. The highlight of the range actually came from a different vineyard in Mendocino County, Naomi 2015. Centenarian Grenache Gris is enough to get any winegeek excited, and this was really something. Soft peach, floral touches, a bit of sweet honey yet an uplifting smoothness with just enough acidity present to render it just utterly drinkable

The red wines were not on the same level. The Feints 2016 blend of Dolcetto, Nebbiolo, Barbera and Arneis had a hefty dose of mouse which kind of pummeled everything else into a corner, and whereas the 2015 Boaz (Carignan, Grenache and Cabernet Sauvignon) faired a bit better balance-wise and whereas it did have a nice, profound structure, it had a rusticity that was too distracting. 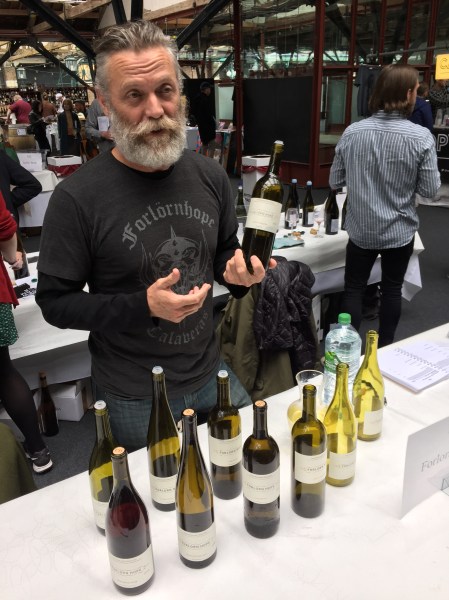 Next, Forlorn Hope, the story of Matthew Rorick and his quest for ‘rare creatures’, unusual varieties, techniques or traditions picked up elsewhere but re-used in a completely new context, and a chaotic mindset to keep it all together. I have spotted the wines sporadically in Belgium, but I understood that the offer is basically in a constant state of flux because of small batches, crazy ideas toppling whatever was done last year and high demand. Subsequently, the wines presented at RWF are different from those available at the importer, and from those mentioned on the website! An estate to keep track of in a sense, as sooner or later you are bound to come across something that it right up your alley. The 2012 Nacre Semillon has spent the last 4 years in bottle and has only just been released. Beautiful in the nose, lime peel, ripe pear, a fresh zestiness followed by a steely precision and focus on the palate.

In white arguably the most interesting wine I tasted at the entire fair was the 2015 Gemischter Satz, a field blend of over 40 different varieties of German and Austrian origin sourced from a single block of vineyard. This is really the type of wine that can keep you occupied for a good while on a quest to discover how al the aromas play together. Floral one second, zesty and fruity the next, a bit of minerality soaring through from time to time, and yet never losing focus on the palate, remaining fresh and delicate. A thought-provoking, contemplative wine. Finally, we get to an experiment with the 2015 Rorick Vineyard Trousseau, which is actually the first vintage. It is very surprising, much more on the fruity intensity-side than what I usually find in the Jura, yet without losing a sense of clarity and freshness throughout.

Think of Chad Stock, winemaker at Minimus Wines, as the Oregon version of Matthew Rorick. Rethinking traditions and conventions, approaching wine with an enthusiastic curiosity to see how far you can push an idea and basically keeping an open mind for anything that will make someone raise an eyebrow to what ends up in the glass. The selection of wines on offer is quite large, so I’ll limit myself to what I thought were the most interesting experiments, but I would urge anyone to seek out other wines as well. 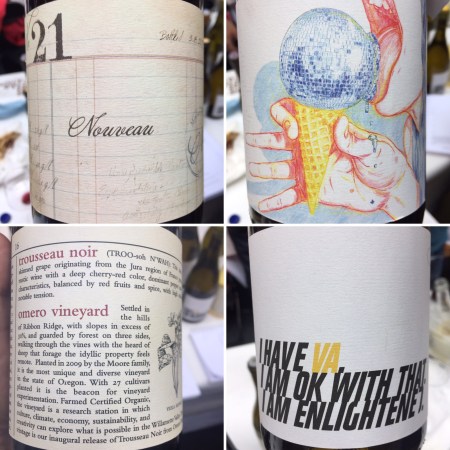 In white, I Have VA 2015 is a challenging wine in a sense that it has high levels of volatile acidity. Now, in the whole natural-conventional debate this is a touchy topic with both sides acknowledging that volatile acidity can have its place in a wine yet disagreeing on how much. With this blend of Chenin Blanc, Chardonnay and Aligote, Chad noted that the development of volatile acidity was a bit out of control during the fermentation, but he decided to just go with it and see where it ends up. It seems to have settled a bit down now that the wine is in the bottle, and while it is quite aggressive at first on the nose, it does become agreeable. Fresh, floral and a bit lean even, but with a relatively low alcohol percentage, perfect for an evening in the sun.

The red wines where more convincing. The Nouveau Nebbiolo 2016 is perhaps the most experimental wine, having gone through carbonic maceration. Normally this would put the focus on fruit and juiciness, but here the Nebbiolo tannins were a bit too strong, ending up with a weird balance with candied fruit in the nose and chewiness on the palate. I was more pleased with the opportunity to taste yet another US Trousseau Noir 2016. Again the fruitiness was there much more than I had expected, but there was a sense of minerality that really added another layer. It reminded me of the 2013 Niepoort Projectos Bastardo I had a couple of years ago, going more on what I would expect in Pinot Noir rather than Trousseau, a surprising finesse.

3 thoughts on “An impression of the Real Wine Fair (I)”