There are a couple of tropes that you can count on in wine writing. Champagne is reviewed to bits around the holidays. March-April is all about Bordeaux with both supporters and critics of the primeur system basically repeating the exact same argument that they have had for the past five years. Summer is about rosé, which, based on what you read, is always better than the year before, higher quality, vintage-impact non-existent and seemingly the only wine you can chug when you pass 25°C, only to be completely forgotten and ignored come September. The rosé hype of the past couple of years remains on the up and up. Given that marketeers figure out something new to keep the buzz going every year (brosé,  rosé-infused gummy bears, or this year’s frosé), I doubt that we will see an end to it soon.

As a drinker, I have absolutely no problem with rosé. Especially on a warm day, its unobtrusiveness and freshness are just what one would need to cope with the heat. As a winelover though, plonk is the most apt description that comes to mind. The vast majority of rosé drinks along nice and easy, until you actually start to think about what you supposedly have in your glass. A bit of fruit but not too much, acidity and freshness coated in something candied and a finish that defines itself by not being there. In an ironic bit, the rosé that can be considered the trigger for today’s hype, Sacha Lichine’s Whispering Angel 2015, is exactly that, not come wholly unexpected at a production of 4.6 million bottles I suppose! 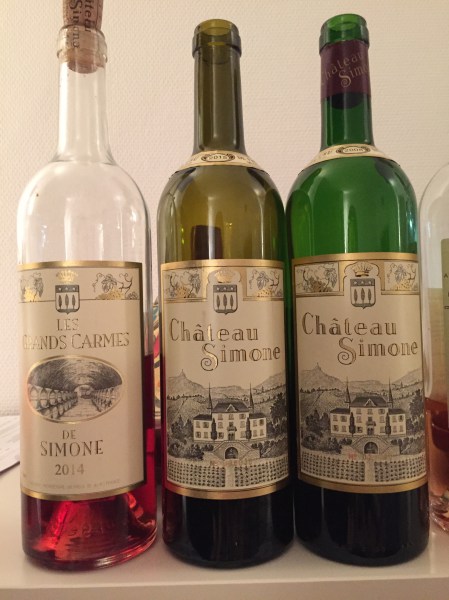 Luckily for the geeks though, there are a couple of rosé wines that do manage to stand out, as proven by a tasting I organized for a couple of wine friends a couple of weeks ago. All wines were French with the exception of Mathilda (coincidentally my first 2016 wine!), one of Chapoutier’s Australian projects, and the more ‘serious’ wines all came from the Provence, but not from your basic neighborhood rosé appellation.

During our sommelier courses, AOP Bellet was basically only mentioned as being the main wine source for the beau monde in Nice, as well as being home to obscure grape varieties that you had to memorize for the exam. I dismissed it as being of little interest, given that it was unlikely that I would actually come across the wines, but lo and behold, a blind tasting organized by passionate members from Belgium’s only wine forum proved me wrong. The red Chateau de Bellet’s Cuvee Baron G. 2008 was one of the greats in a blind tasting then, and when I came across the same estate’s rosé wine the other day, I just had to snap it up. After a flight of correct but unmemorable roses from all over the South of France, Baron G. 2015 rosé was a first highlight. The grape variety, 100% Braquet can only be found in Bellet, and delivered a complex, layered wine, showing aromas of grapefruit zest, celery salt, even elderflower after a while. The aromatic intensity reappears on the palate but does not become too dense, with a lovely bitter touch in the finish. A serious, proper wine!

Chateau Simone is one of the great classics of the Provence. The estate first applied for the AOP Chateau Simone in the ‘40s, but as neighboring estates where jealous, the AOP was granted under the name Palette. It did little to help the other estates; nowadays Simone owns 50% of the appellation and is the only one with a reputation beyond the Provence. Simone’s white wine is legendary for its unique character and ageability (a tasting by LRVF went back to 1968 with high marks!), but the other wines are equally unique. 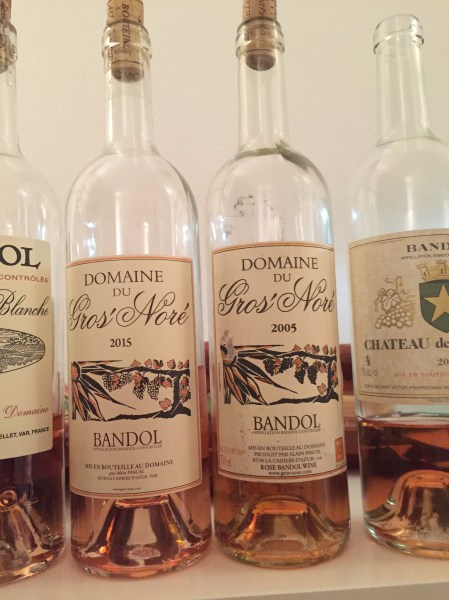 The Estate produces two rosé wines. As far as I could find, they only differ in the varieties included. Les Grands Carmes 2014 consists of 45% grenache, 30% mourvedre, 5% cinsault and 20% merlot, whereas the merlot is replaced by a blend of little known local varieties in the rosé 2015. The LGC came across as the most natural of the two with aromas of sour cherries and even lambic. Ample richness on the palate and a bit of warmth in the finish, this one was distinctively young with a lot of elements that had not yet fallen into place. The rosé showed much more elegance, also a bit lighter in colour and had a very subtle spiciness that complemented the vivacity extremely well. Some people compared it to Jura red, which I kind of get as it has the same kind of subdued complexity and freshness that just clicks.

Bandol is France’s best appellation for ageworthy rosé, period. The region excels in wines with complex aromas of fruit and spiciness in their youth, developing depth and savouriness with time for those with the patience to wait. The first pair came from Gros Noré, an estate that only started producing its own wine in the late nineties; before that they sold their grapes to Ott and Pibarnon. The 2015 starts with aromas of garrigue, the typical herbs de Provence, strawberries, cherries and a distinctive flintiness. I matched it against the 2005 (average guess was 2010!) which for me had the same flintiness with the fruit now being overtaken by garrigue and spiciness. In its youth, the perfect wine to enjoy on a hot summer day; with age, a wine that screams to be paired with a good slab of meat! 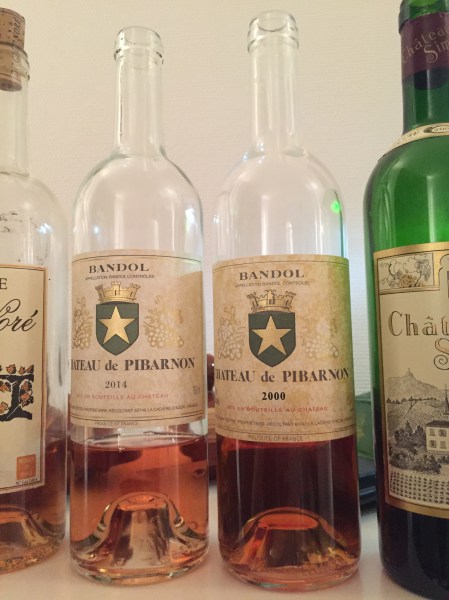 Up next was perhaps the most well-known Bandol estate, Pibarnon. I have tasted the red wines of the estate on numerous occasions, at tastings or in class, and was always overwhelmed by the complexity that the wines can show in basically all stages of development. The 2014 was more full-bodied in comparison to Gros Noré, creamier and more on the spiciness, a gutsy wine that you would need to pair with an intense dish. The older vintage set against it was completely different. Damp fruitiness, a little bit vegetal but overwhelmingly floral at the same time. Structurally speaking it was a naked wine, savoury but without becoming too dense. There was a little alcohol touch in the finish, showing that it was at its limit now but then again, this was 2000!

It should not come as a surprise that these wines are on the upper end on what you would normally pay for a rosé, with Simone 2015 being the most expensive one at 29 euros, and Gros Noré 2015 the cheapest at 19 euros. People unfamiliar with these wines or these styles would huff and puff that someone would pay so much for ‘just’ a rosé wine, but the value for money here is undeniable once you actually taste it. Sure, you can follow the horde of trendy rosé drinkers with Whispering Angel for the same price. Then again, you would be paying 20 euros for an industrial wine, while you can get something that you would actually remember for the same price, offering a completely different level of intensity, complexity and satisfying delicousness. Not even the most ridiculously priced fashionable rosé can beat that!

2 thoughts on “A different kind of pink”