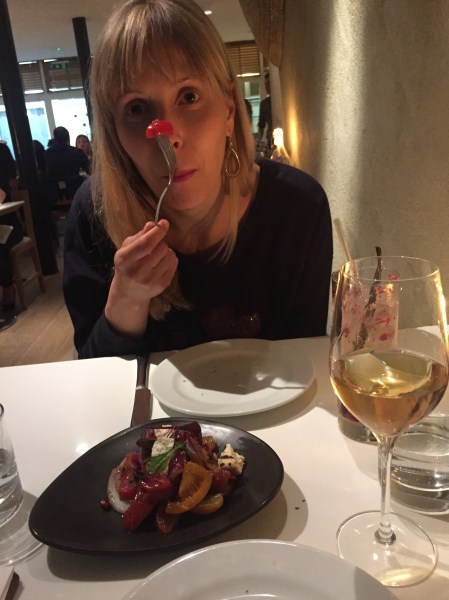 Do I still need to introduce Yotam Ottolenghi? The man’s books can be found everywhere, but in all fairness, rightly so. I think that I have made almost everything that can be found in Plenty, bar a couple of desserts, and while Nopi proves to be a bit more challenging, it has done its part in many successful dinner parties. Procrastination meant that only the deli in Spitalfields still had a table for two on a Saturday evening and the place was packed. Service ran smooth though, and we were given ample time to go through the menu and wine list.

Winewise, the selection is small and can be best described as eclectic, containing wines from various regions, mainly in France and Italy and ranging from small up-and-coming producers to well-established winemakers. There was also no real consistency in organic, biodynamic, natural or traditional winemaking, so I did wonder how exactly it had been established. It came across as if someone had simply picked what he or she loved or was raving about, so it is hard to argue with passion though!

My girlfriend stuck to cocktails but was not really impressed, especially at the given price range. I decided to check out the neat wine selection by the glass, starting completely out of the box with the Chinuri 2013 from Georgia, made by Iago Bitarishvili. Chinure is a grape variety only found in Georgia, and up until now I only came across it during wine fairs, having never felt the urge to buy a bottle (which would be next to impossible in Belgium anyways). It was a pleasant surprise, good acidity, not as orangey as I had assumed and actually very good with our starter, a tomato salad with grilled halloumi. As always, the original beats my attempts at home, but I did get close! 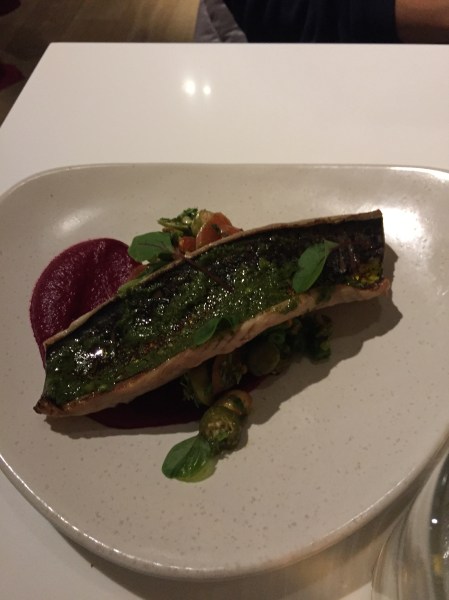 For the main course I chose lamb with lentils, which was good, however not as memorable as the mackerel with beet root and capers that was presented at the other side of the table (a good opportunity to use my negotiation skills and to use some built-up relationship-credit for a taste). It was packed with flavor, balanced yet light and I really loved the capers, adding just a bit of saltiness with a nice bite. I switched to the entry level Saumur Champigny 2014 from Thierry Germain, 100% Cabernet Franc, which, unsurprisingly, did not go with the mackerel at all, but was nice in combination with the softness of the lentils accompanying the lamb. Given that it is more a vin de soif, I think that it is more important to look to structure and texture instead of flavor intensity as the lamb would dominate anyways.

Overall, I would argue that Ottolenghi’s Spitalfields was the experience of the weekend that I would label as OK. Granted, we had just spent the afternoon at Noble Rot, so we were not in the most objective condition, but while the food was great, it lacked a bit the element of surprise (spoiled by the books?), of discovery that we found in the other restaurants. I am a fanboy however, so next time in London, Nopi will be on the top of my list!