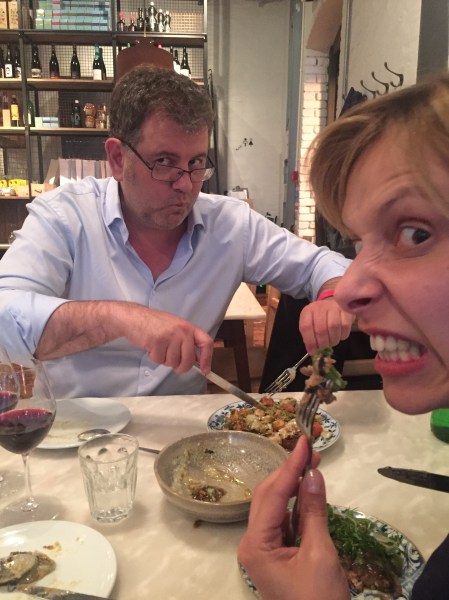 Finding a restaurant in London on a Sunday evening proved quite the challenge. I had a (short) wishlist, but almost none of them were open bar for a Sunday roast. Luckily Taberna do Mercado is open 7/7, and just a stone’s throw away from the Truman Brewery where RAW 2016 took place. I was led here via Jamie Goode’s wine blog, and ever since the tasting of Portuguese wines that I organized last year, I was curious to discover more about Portugal’s wining and dining.

Service was good, but a bit uneven. The girl who welcomed us took the time to present the different dishes that could be shared and told us to look at our ease. One minute later, one of her colleagues told us to hurry up as the kitchen had just started to accept the final orders! Admittedly, it is a good sales trick as we randomly picked among the items chalked up on the board. Winewise we were given a bit more time to go through the concise selection. The wines were chosen with care, from known and less known producers with older vintages being well-represented as well, so you could have a good idea of what Portugal has on offer. I always like it when a restaurant goes through the effort to present a selection of sweet or fortified wines, and given Portugal’s history I was happy with what was on the list, going back to the chef’s birth year even! 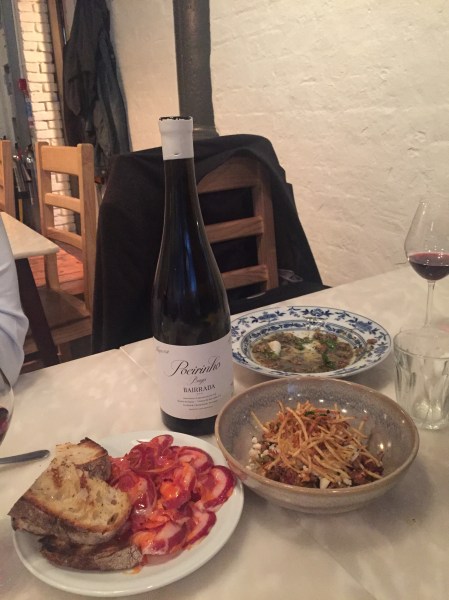 We had set our eyes on the wines of Bairraida, the region which was the highlight of last year’s tasting and after being informed that our first choice, Luis Pato’s Fernao Pires was unfortunately sold out, we went for Quinta de Baixo’s Poerinho 2012, a wine out of the Niepoort portfolio. Baga is such a fascinating variety. It can be used for the cheapest, mass-produced rosé wines of Mateus fame as well as for wines with depth, freshness and grandeur. High acidity, an overwhelming tannic presence and an extended ageing in large barrels conjure up similarities with Nebbiolo and when it comes to finesse, it is a worthy rival. Floral notes as well as red fruits in the nose, yet the palate is more mineral with a remarkable acidity supporting it. Towards the finish you do get fine tannins, but the freshness remains throughout with great length, ready for a next sip. A great wine, very versatile to drink with or without food, now or in five years. 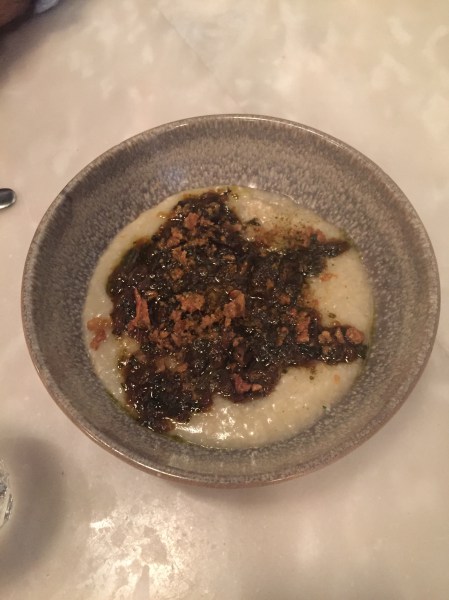 Knowing little about Portuguese food, we gave our full confidence to the chef. Calorie-counters would be better off elsewhere as the meal could be best described as comfort food with an edge. Presentation-wise eyebrows were raised when the first dish arrived, snail and chicken canja, but it was packed with flavor. Other dishes followed in rapid succession, including delicious cuttlefish and pig trotter coentrada, or the pork tartare with cockles, but special mention goes out to the cured meat selection, sourced from a Portuguese specialist in Bisaro pork, so intense yet smooth. Overall I would say the cuisine is texturally challenging, but bold and directed at the same time. It may not be a crowd pleaser, but a couple of Madeira wines later (5Yo Boal and 10Yo Sercial from Barbeito with the Sercial kicking Boal’s ass), we found ourselves enthusiastic to stop by again for new discoveries.