So, having enjoyed last year’s experience at Ottolenghi’s Spitalfields location, we took our precautions and booked a table at Nopi well in advance. Rightly so, seeing as the place was packed! I am an enormous fan of the Plenty books, mainly as the recipes remain so accessible. Sure, you need a couple of ingredients that may be relatively obscure to what you would normally put to use in everyday cooking, but overall, I am always surprised by the ease and speed of actually preparing the food. The food presented in Nopi is from a different level though, and whereas the explanations still make it sound doable and easy, from my experience, there are a couple of recipes that you would need to put through a test-run before presenting them at a dinner party. 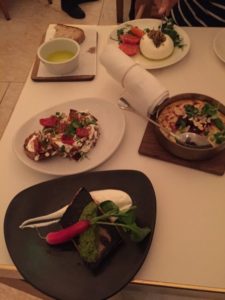 There is an interview with Heidi Nam Knudsen, the wine buyer for the Ottolenghi restaurants, posted on the Real Wine Fair’s website which gives a good indication of the role wine plays in the whole concept. The goal is to go natural, but from what I gathered from the list: not too dogmatic. You are presented with a limited and thus eclectic selection, but you can sense the enthusiasm and love for these wines. It is however a bit of a hipster’s choice; if you are not familiar with what is going on

the wine world these days, the selection going from Georgia over Slovenia to Pantellaria can be baffling. There is a ‘classic’ offer for the less adventurous, but there is a price to be paid in the sense of accepting quite the markup.

Now, a cuisine with an emphasis on vegetables and a rather outspoken punchy flavour profile is not the easiest to pair with wine. I remember a visit to the Barbary a couple of months ago where we had a fantastic evening, yet the Mother Rock White chosen matched with nothing really, as the intensity of the food completely crushed what the wine had to offer. As if this isn’t challenging enough, being offered sharing plates that can go in all sensory directions make it nigh impossible to find the one to match them all.  Acceptance is the first step, and after that it gets easier. Either go for a ‘neutral’ option, which is always a compromise I personally am not willing to make, a vin de soif chosen for its thirst-quenching quality and not its complexity, or for a great plunge into the unknown. 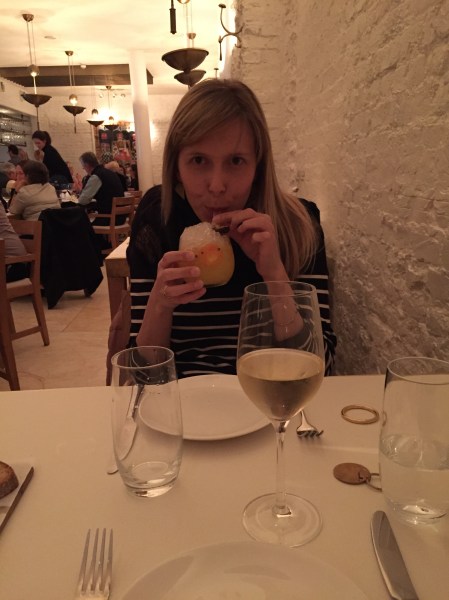 While the girlfriend enjoyed some of the cocktails, which were actually more to her liking as to what she tasted last year, I went for my third choice: into the unknown with Palestinian wines. The Cremisan Winery has actually been around since the 19th century, but it has only been quite recent that the Salesian Monks in charge have been working on expanding their commercial efforts on a global scale. They attracted an Italian oenologist and set up a collaboration with an international NGO to direct any profits towards education programs in the region.

The white 2015 is a blend of two grapes that have gained some notoriety for not being featured in Jancis Robinson, Julia Harding and José Vouillamoz’ Wine Grapes, Hamdani and Jandali. Apparently, these varieties are indigenous to the region of Bethlehem, which is more than enough to pique a winegeek’s interest. On the nose, it reminded me of a sunny Sémillon, zesty, ripe fruit, which did not present itself so rich on the palate, being balanced out with a bit of freshness. It is not very outspoken, more subdued and something that is destined to always take second place, which made it the perfect accompaniment for the food actually!

For our starters, we looked for a mix between the restaurant’s self-proclaimed classics and a couple of lesser known dishes. Our absolute favorite was Burrata with blood orange and coriander seeds, a combination that does not work on paper but that manages to create such a dazzling impact in your mouth that you wonder why you never tried it before. The second dish, being the Valdeon cheesecake with pickled beetroot gets the prize for being the best match with the wine as the richness acts as a natural complement. The pumpkin with yoghurt dressing and charred cherry tomatoes was very fine in its own right, yet lost out against the wine. 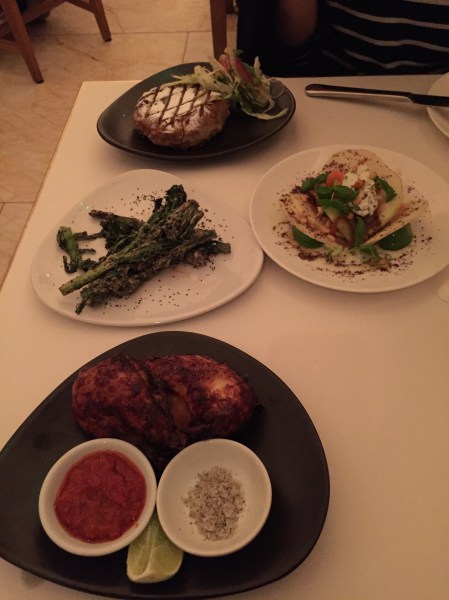 Now, the first Nopi recipe that I attempted at home was the twice cooked baby chicken with chili sauce and lemon myrtle salt. Being one of the trickier recipes, I was surprised that it actually turned out good, though I sensed that it was not exactly what it should be. Having tasted the real thing now, I realize that I still have a long way to go! After spending so much time in the Asian stock, the meat is ever so tender and soft, meltingly good, especially when given a kick with the chili and the extra bit of flavouring provided by the salt. A great example of a dish elevating all its individual components, making it a worthy signature dish.

Our second flight of vegetables was a bit of a mixed selection. The beans with green salsa were fine but a bit uninspired, the heirloom tomatoes and wasabi mascarpone were fine, yet the kohlrabi felt out of place. It is with a bit of pride that I can say that my grilled broccoli with tahin was way better than what we were served here, which just seemed to be tossed on a plate. Luckily, the pastilla saved the day, so packed full of heady spiciness that it could only really be enjoyed on its own, utterly delicious.

Passing on to red for this final flight, I was pleased with the Baladi of the same estate. Juicy, very much on the fruit yet soft on the palate, kind of reminding me of a Grenache that has seen carbonic maceration, made in a vin de soif style, with a nice freshness to it. The type of bottle that you can drink at ease without realizing it. Unobtrusive at its worst, a great thirst quencher at its best. It worked well with the pastille, which surprised me with all the spices, but the chili sauce kind of nipped its potential in the bud.

Whereas I considered last year’s visit to Ottolenghi Spitalfield just okay, Nopi took it up a notch, and seemed to deliver more bang for the buck. It is a bit of the shame that not all dishes delivered the same kind of high, but as last year, a fanboy’s expectations may have come into play again. In short, I would visit again, if only for the newly discovered classics, but also to see if that innovative spark that I see on Ottolenghi’s Instagram actually stays alight in the restaurant’s kitchen!